LONDON – Today we’re celebrating a record-breaking year of hugely encouraging sales and the first-ever public ticket ballot as well as ground-breaking social impact in what will be the biggest and best Rugby League World Cup in history.

In a year of achievements and firsts, our unique event, with men’s, women’s and wheelchair events being held simultaneously, has also partnered with Cazoo in the biggest sponsorship deal in the tournament’s history which saw the UK’s leading online car retailer announced as Principal Sponsor.

The confidence shown in the tournament, with the optimism of fans returning to stadiums in 2021, has shone through in the ticket sales which have exceeded our expectations. We were also honoured to celebrate the bravery of frontline workers during the COVID-19 pandemic with 20,021 free tickets being allocated to key health and care workers.

Rewarding the health professionals has been just one of the significant social initiatives of the most inclusive Rugby League World Cup in history as we became the first major international sporting event to launch a first of its kind Mental Fitness Charter.

The benefits of the event for communities across the country have also been highlighted through the tournament committing to deliver the first Physical Disability World Cup during RLWC2021 and the capital grants programme, CreatedBy, which has seen more than 140 projects approved in 2020, with a total value of more than £10million.

The Rugby League community – and an exciting new audience – have also reflected the confidence in the tournament with hugely encouraging interest in tickets. There are fans from 117 different postcode areas that have purchased tickets from across the UK, with London and Northern cities dominating, and over 50% of ticket purchases – in the most affordable and accessible tournament – from fans aged between 25-44 years old.

Fans from 32 countries around the world have bought tickets, with 70% of all ticket purchases considered new to the sport. 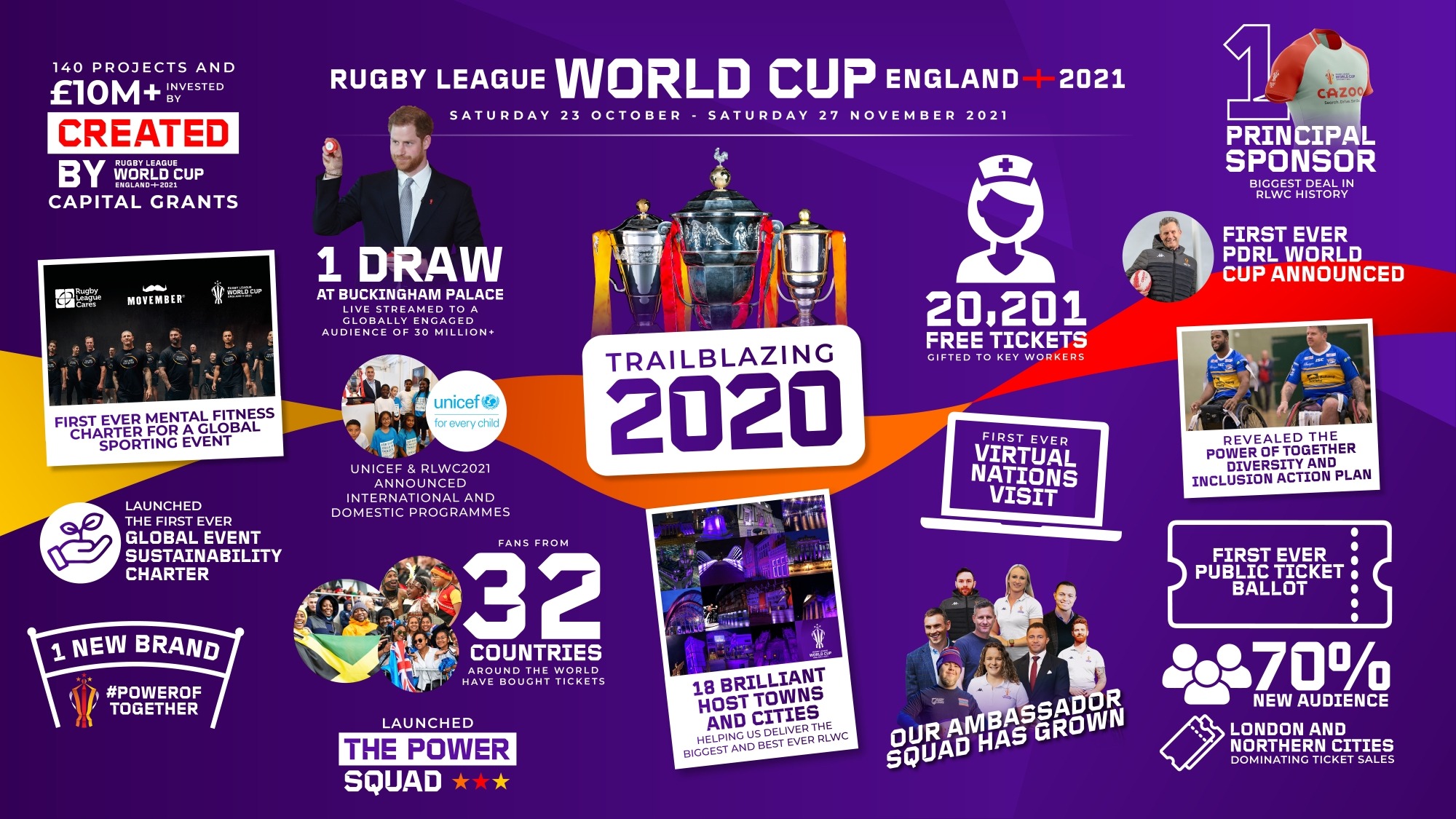 A remarkable year started at Buckingham Palace with the first ever public draw, conducted by the Duke of Sussex, which was streamed globally by host broadcaster BBC and on the Royal Family social media accounts to an engaged audience of more than 30 million people.

Joining the star-studded group of ambassadors recently was the inspiring Oliver Thomason who becomes the Official Inclusion Ambassador. Having championed the sport of Rugby League and social inclusion in many ways since making his debut for his beloved Warrington Wolves, Oliver joined the team to now champion social inclusion on a global stage.

On 10 June 2020 – 500 days to go to the opening fixture at St James’ Park in Newcastle – we revealed a new brand identity, celebrating ‘The Power of Together’, with the goal of connecting the tournament with a universal audience. A refreshed RLWC2021 inclusive brand symbol – the Cup – was created.

At the ‘One Year To Go’ mark, world renowned poet Tony Walsh captured the spirt of ‘The Power of Together’ in his widely acclaimed declaration of hope which featured on national and local media – and underlined the essence of a global event with local positive aims.

The final highlight of the year was the sponsorship with Cazoo, who joined Kappa and Kuehne+Nagel as new sponsors in 2020, joining the existing portfolio of Eversheds Sutherland, Deloitte and Manchester Metropolitan University.

The tournament also announced its first Official Media Partner in The Voice, the only national black newspaper in the UK.

At the heart of the tournament has been the principles of good governance and integrity, and the success of that approach has been underlined by the outstanding board governance review supported by the launch of a sustainability charter and the work undertaken on the diversity and inclusion action plan.

“The Rugby World Cup 2021 has already delivered significant positive social and commercial benefits to its 18 host cities and the surrounding areas – across the North of England.’

“Through smart partnerships and innovative thinking, the RLWC2021 is well on course to achieving its stated aim of being the biggest and best in history.’

“As the largest sporting event held exclusively in England next year, the RLWC2021 follows in the tradition of the previous global events held in this country and will be a true celebration of the sport.”

“It’s been a remarkable  year as we build our momentum to 2021, one we could never have expected, but a year we’ve adapted, advanced and seen huge achievements – especially by delivering  positive social impact that are already making a difference.”

“As fans begin to return to stadiums across the world, we know that RLWC2021 is going to play a major part of that celebration of sport next year.”

“We have been hugely encouraged by the support we have received which has converted into ticket sales but we know the work doesn’t stop here as we look to deliver the biggest and best Rugby League World Cup in history. The positivity from results in 2020 along with the optimism and hope for better times ahead gives us the perfect platform from which to achieve our ambition.”