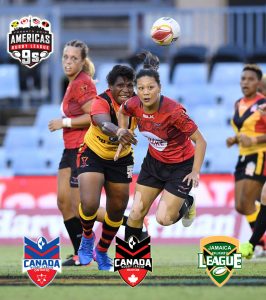 TORONTO – As part of the upcoming inaugural Americas Nines tournament in Toronto on May 18th, 2019, the women’s teams have named their rosters. The Canada Selects, Ontario Rugby League and Jamaica Selects will all be participating in the event.

Ontario Rugby League features many new players to rugby league with background in rugby union 15s & 7s. Four players will be playing Rugby League for the first time, after joining the team practices early this year.

Jamaica Selects led by local Clarence Brown, has recruited players from the Jamaican rugby union team (most from the Toronto area) to learn the sport of rugby league. With both teams expressing interest in the upcoming Rugby League World Cup they are sure to face each other again in  future matches either in 9s or 13s in the next couple of years.