The Canada Wolverines were playing their first home test match vs USA in 2 years and there was plenty on the line. After both Nations had scored victories over Jamaica, the inaugural Americas Championship trophy would go to the winner of this huge game! Not only was this at stake but first points advantage for the Colonial Cup in 2016 would come from this game. This was going to be a massive game for the fans as all players come out intent on winning the trophy!

As in all important games like this, the defensive work by both teams was very tough for the first ten minutes but there were some opportunities opened up by strong Wolverine forward Joel Hulett who made a number of half breaks but lacked support to finish off these opportunities. After 13 minutes Akarika Dawn for Canada took it upon himself to test the USA defence close to the tryline and powered over for a try to open the scoring. Steve Piatek missed the conversion but Canada had the early points. Through various reasons, including a poor short kicking game, the second 20 minutes of the first half saw Canada tackling for most of this period. USA had plenty of ball and tested the Wolverines defence but it never cracked and the rest of the first half remained scoreless. While Canada were happy to walk into the sheds at half time in front, there was plenty of energy burnt from all the tackling and the missed opportunities could come back to haunt them.

Canada came out on fire in the second half and were throwing everything at the Hawks but they remained patient and stopped any tries being scored until the 64th minute when robust Wolverine Prop Alex Boyd raced 40 metres towards the tryline after picking up the ball from a charge down and then being tackled ten metres out. Canada quickly threw the ball out wide for Kevin Gurniak to score a try in the corner. Steve Piatek missed the conversion from the corner so Canada had to be happy with the 8-0 lead. With only 15 minutes remaining this was going to be interesting and we didn’t have to wait long for the Hawks to hit back! A pass that went out the back was scooped up by Hawk’s full back Roman Lowrey who out paced the opposition to score in the corner after 68 minutes. The conversion was missed but you could see this gave the USA a huge boost and with only 5 minutes left on the clock a quick passing movement saw Hawk’s centre Gabriel Farley race over for a try! With the scores locked at 8-8 the conversion was missed again so the scores remained locked. Officials were racing around to see what happened with the trophy if the scores were locked up at full time but there was no need for that discussion as USA Hawks speedster raced away from the Wolverines defence to score with just over a minute still on the clock! The USA Hawks had come from behind to score 3 tries in the last 12 minutes to win this game and the loss was devastating to the Wolverine players. To lead the whole match until the last 5 minutes was a big blow to a team that really didn’t play that poorly but didn’t take their opportunities. The USA Hawks showed a lot of belief and patience and fully deserved their victory over Canada!

Of the occasion Jamie Lester, Canada Wolverines Coach remarked, “It was a tough loss. I thought we had done enough to get a win when we went 8 – 0 up with 15 minutes to go given the context of the match. But I have been around long enough to know that 15 minutes in rugby league is a long time and unfortunately for us we weren’t good enough to close the game out. Last year we let USA back into the game in similar situations so we need to learn from these experiences and move forward from here. This week will be an even bigger challenge for us down in Philadelphia. We will need to lift a couple of notches to take the Colonial Cup series.”

In stark contrast Dustin Cooper of the USA Hawks “…was very proud of the boys’ effort. We expected a tough arm wrestle on foreign soil, and that’s exactly what we got. We created plenty of opportunities but just couldn’t capitalise. To Canada’s credit, their ruck control and goal line defense was on point. The boys regrouped, did exactly what I asked of them in the second half, and as a result we were able to play fast and direct, and get points on the board. I’m really happy for the boys.”

Everything now turns to Eden Park in Delaware, USA to see if Canada can retain the Colonial Cup next Saturday. One thing for sure is that there is not much difference between these two teams so anything is possible and a -6 points difference is quite possible to reverses if Canada can lift their game and take their opportunities. This was a classic game with a fantastic finish so congratulations to the Americas Championship Winners in 2016! 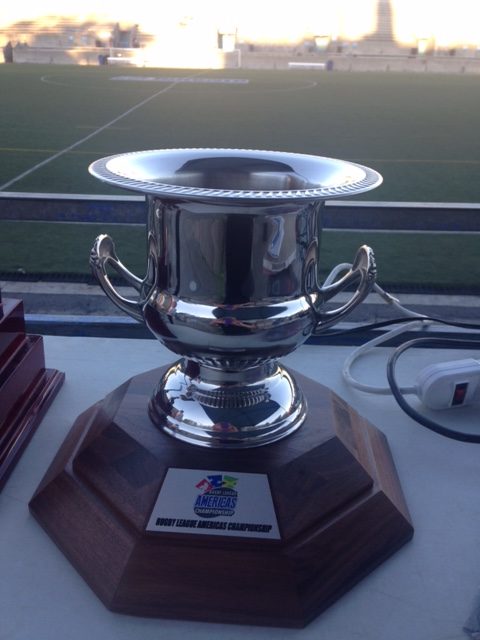