The Canada Rugby League Association is pleased to release the schedule for tomorrow’s inaugural Americas Rugby League 9s Festival. The tournament featuring the Canada Wolverines, USA Hawks, Latin Heat and the Reggae Warriors men’s national teams battling for the title of Americas Rugby League 9s Champions will also feature a Women’s competition as some of Canada’s, Jamaica’s and the World’s best women’s Rugby League players take to the field for the first time in Ontario. The Georgina Griffins, the first junior Rugby League club in Canada will also play a Tag Rugby League exhibition game and Masters Rugby League as the Ontario Greybeards run through their paces in preparation for the UK’s South London Silverbacks Masters, two game tour from June 13 to 15. 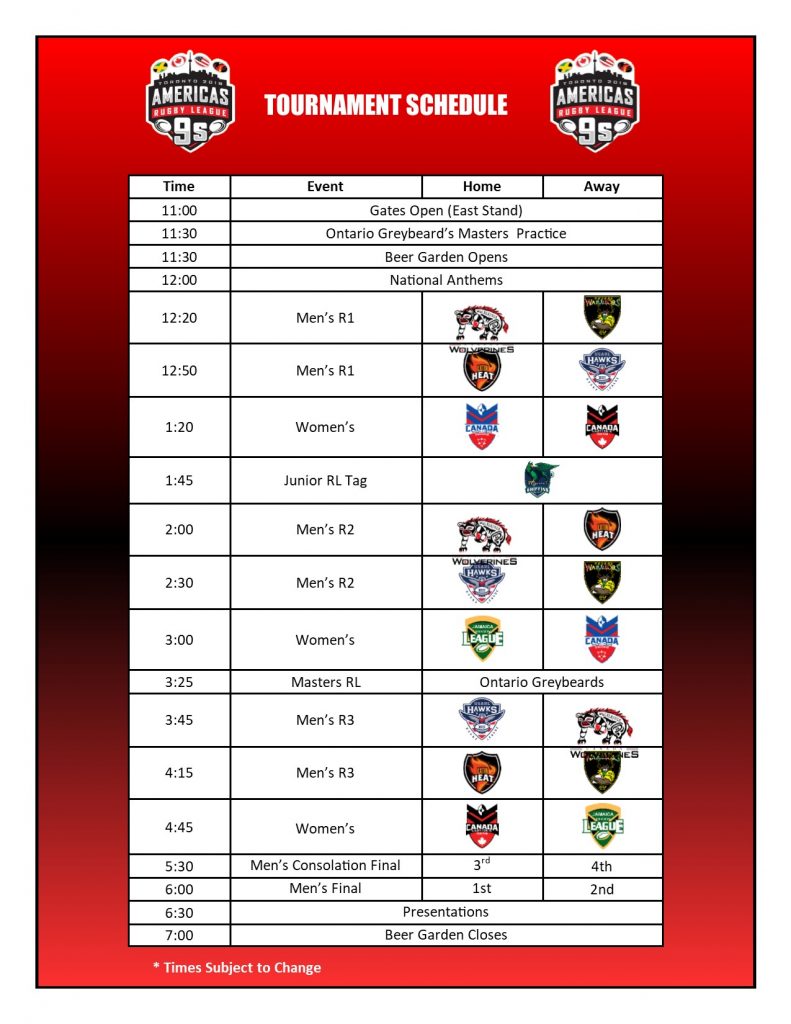 Access to Lamport Stadium will be via the East Stand with gates opening at 11:00 am. The Craft Guys Beer Garden will open shortly after at 11:30 am. The teams will gather for the National Anthems at 12 noon with the first round of the men’s competition featuring the Canada Wolverines and Jamaica Reggae Warriors kicking off at 12:20 pm.

The day will culminate with the much anticipated Men’s Final kicking off at 6:00 pm.

“Rugby League Nines is an exciting spectacle for the fans and we are ecstatic to showcase the international version of this game to the fantastic rugby league fans at Lamport Stadium, affectionately known to Toronto Wolfpack supporters as ‘The Den’.

Come and experience a full festival atmosphere and non-stop Rugby League action. Try out some exceptional craft beers in the The Craft Guys renowned Beer Garden whilst cheering on you favourite team.

About the Americas Rugby League Nines

Rugby league Nines (or simply Nines) is a modified version of rugby league played with nine players on each side competing over two nine-minute halves. Nines is usually played in festivals, as its shorter game play allows for a tournament-style competition with a champion crowned over the course of a day or weekend.

– Each game will consist of a team fielding 13 players, with no more than nine on the field at any time. Unlimited substitutions are allowed from a named bench of four players.

– The game lasts for 20 minutes, divided into two halves of nine minutes. Two-minute intervals allow the teams to change ends.

– Each half starts with a place kick.

– Conversions after a successful try take the form of drop kicks. Players from the team that has conceded the score do not have to retire behind the try line but must not interfere with any conversion attempt.